To share your memory on the wall of Shirley Wood, sign in using one of the following options:

There may be a delay while processing. Please do not click the back button or refresh while a payment is processing.

Your donation has been processed successfully

A receipt has been emailed to the address provided. A receipt may also be printed.

Shirley Mae (Boyden) Wood was born on February 16, 1940 to George and Gladys (Baysinger) Boyden in Mitchell, SD. She attended Lake George and Platte School and was united in marriage to Darvin Edward Wood on February 27, 1958 in Port Smith, Virginia. She was employed as a Cook at the Platte Hospital for 19 years.

Shirley was a member of the Academy United Church of Christ and enjoyed the outdoors while fishing, watching deer and going for motorcycle rides. She also faithfully attended coffee at Shorty’s.

The insignias listed here may be subject to copyright and/or trademarked. Those copyrights and trademarks are owned by the respective organizations.

We encourage you to share your most beloved memories of Shirley here, so that the family and other loved ones can always see it. You can upload cherished photographs, or share your favorite stories, and can even comment on those shared by others.

Posted Aug 04, 2019 at 10:34am
Shirley was like a sister to me ..She was 11 when I was born so we really grew up together !!We had so much fun together..Then later she was more like a mom to me as she gave me lots of teenage advice!!Shirley and Darvin opened their house up to my husband and I when our daughter wa born and our house was not ready ..Shirley made a little bed for her in a dresser drawer !!!We will all miss her very much but I know she is dancing in Heaven now !!
Comment Share
Share via:

Posted Aug 03, 2019 at 01:18am
I have some good memories of my little sister, while she was growing up. She was more like my own little girl, I guess. She was much younger than me. She was on my doorstep so many mornings waiting for us to get up. If I needed help and got behind with my work, I’d call her up. She would bring her little baby girl along and help me. That little girl was Lorna. When we didn’t get to see each other In older years we called each other. I’m going to miss her I love her still. I know that mother and dad will be waiting there for her and happy to see her. From her loving sister, Nora
Comment Share
Share via:

Posted Aug 02, 2019 at 12:58pm
Lorna-
I am so sorry for your loss of your mother. She was very loved and a blessing to you and your family. She is with your Dad now and they will always be looking over you. You are in my prayers.

Pat McDermott purchased the Plants-A-Plenty for the family of Shirley Wood. 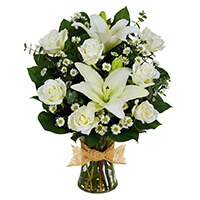